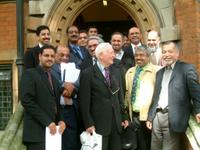 Together with Lord Avebury and a 'disenchanted group' from Bahrain 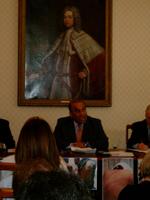 My opening remarks at the seminar on "Bahrain: 30 years of unconstitutional rule" chaired by Lord Avebury the Vice-Chairman of the Parliamentary Human Rights Group, at the House of Lords, (1 Abbey Gardens, London SW1), 25th August 2005


………
……..
Let me begin my remarks by a positive reference to a speech made by the king of Bahrain last February. The speech, “I dreamt of a homeland that embraces all its citizens”, provides glimpses of how sheikh Hamad perceives himself and his role as a person whom destiny and history have charged him with a mission he defines as ‘moving the country forward.

Unfortunately, and in spite of all the creative public relation endeavours, sheikh Hamad’s performance as a nation-builder remains abysmal. At least it is not anywhere near the hopes many of us were led to believe when sheikh Hamad announced in 2001 his intentions to take up the challenging tasks of reforming the dynastic rule in Bahrain and to build a country where citizens, regardless of their backgrounds would enjoy equality in rights, privileges and responsibilities.

Sheikh Hamad ignores the fact that his dream of a land that embraces all its citizens will remain a dream as long as he adamantly refuses to deal with what I call the legacy of the conquest. This legacy refers to 1783 conquest of Bahrain by the al-Khalifa family and its tribal allies from the mainland Arabia. To this day, the ruling family in Bahrain, and of course sheikh Hamad himself, refer to that conquest as the basis for establishing the legitimacy of their dynastic rule. I am not talking here about few symbolic signifiers of this legacy such as titles or demeanours. No. The legacy of conquest is to be found in the real world of politics and business. It is to be found the daily experience that any al-Khalifa person whether senior in rank and age or not, is above the law. The legacy of conquest is found in the monthly stipend of thousands of pounds given to each and every member of the al-Khalifa. It is to found in the songs and poems that Bahrain children learn to sing and recite acknowledging the conquest as an act of historic salvation. And in the monuments constructed to tell parts of the inhabitants that they are victors and tell the others that would remain the vanquished. The legacy of conquest is found in the submissive acknowledgement by an employee, professional or otherwise, that a priority in appointment and in promotion is, naturally, reserved to one’s al-Khalifa colleagues. I can of course go on into more examples and details.

Sheikh Hamad has not only refused to address these day-to-day manifestations of the legacy of conquest but he has indeed expanded them further. During the past five and a half years sheikh Hamad has done a great deal to consolidate this legacy and consolidate the feudal privileges enjoyed by his siblings. In fact a process of Khalfanisation of the state initiated by him has putting an al-Khalifa person on the top of nearly all government and public institutions in Bahrain.

The poor performance of Sheikh Hamad as a reformer and a nation-builder does not surprise observers of Bahrain’s political development and students of its recent history. The tremendous tasks that Sheikh Hamad pronounced his intention to undertake required overcoming serious obstacles. Sheikh did not succeed because he was unable, and I am tempted to say unwilling, to pay the price of reforms. A price that would require him to take straight on some of the persisting obstacles to reform and to nation building.

In May 2001, three weeks after my return to Bahrain following 25-years in forced exile, I delivered a public lecture in which I pleaded to sheikh Hamad that he addresses some of the most obvious and most immediate of these obstacles. Unfortunately he chose to ignore that plea as well as other pleas made by so many concerned Bahrainis. Sheikh Hamad’s unyielding position has complicated an already very complex situation in Bahrain and may frustrate all attempts to bridge the widening gap between the diverse political, religious, ethnic, and other segments in Bahraini society.

Another reason for the abysmal record of the reform project in Bahrain is found in Sheikh Hamad perception that reforms are nothing more than a series of makramas, royal grants, aimed at securing allegiance and support. Relying on makramas seemed to work for a while as it helped appease some of the leaders of the opposition. Unfortunately sheikh Hamad ignored every warning sign that generous grants cannot be a viable alternative a thoroughly work-out strategy of reforms.

In spite of past failures, Sheikh Hamad continues to view the reform project as his own private initiative. It is his grand Makrama. He remains reluctant to consult with any of the political groups on any aspect of the stagnant political process in the country. On he has the power to draw the contours of the process, to chart its future, its perimeters, its intensity and its extent. Indeed, through his political and financial makramas the sheikh continues to insist that he, and he alone, who determine what social group or political network, is to be included in the public sphere.

Let me end these remarks by going back to the royal speech of last February where sheikh Hamad where speaks of his dream of a homeland that embraces all its citizens”. Unfortunately for sheikh Hamad and for the people of Bahrain, he went the wrong way to fulfil that dream. His dream is turning into a nightmare for his people.


An Arabic version of the the above can be found here

Thanks for posting your speech. Hopefully it will allow people to criticize what you said, rather than trying to discredit you with a label ("islamist", "maoist", "revolutionary communist").

Ibrahim Sharif had an interesting lecture. One of his claims was that the dissolution of the parliament in 1975 did not have as much to do with the SSL as it had to do with the size of the Amir's privy purse. I'm wondering what you make of this claim since you were in parliament at the time.

What can one do if name calling is the best some can offer?

Ibrahim has a good argument. I do not disagree.

The way I see it, it is a combination of many factors including the SLL, the oil-boom of post October 1973, the draft law on public lands, and more. To some, like Khalifa bin Salman, the idea of being publicly criticised
by what he viewed as riffraff was abhorrent.

One anecdote refers to Mohammad bin Salman (Khalifa's arch rival/ brother saying, gloatingly, that Khalifa deserves (yistaahil) that Hassan al-Jishi, the Majlis Speaker, looks down from the podium at the PM and other al-Khalifa ministers sitting in the first row of the majlis . (It sound better in Rifaai-Bahraini)

So in the first parliament did the MPs openly criticize the PM and his policies?

Also, do you by any chance know how the size of the King's privy purse is determined now?

I took a quick look at the new constitution and the new article 33 says:
"The Royal Court is attached to the King. A Royal Order shall be issued to regulate it. Its budget and the rules for the budget's control are set by a special Royal Decree."

Do you know what rules the King has issued for the budget's control?

Yes Chanad! (and no). While many members of the 1973-National Assembley were critical of the government, of ministers and of the Cabinet, no one named the PM in so many words. But he knew, the press knew, and the public knew that the angry words uttered aganist the cabinet as a whole, or at the 'system' was directed to him.

He had to endure it all while sitting silently ...session after session listening to the riffraff attacking his government. He did not respond directly but you could see him passing notes or even whispering his instructions to one of five ministers who acted as his 'voice': Fakhro, AlBahrna, alShirawi, and Mohammad bin Mubarak.

On occasions, specially following one of the many highly critical and, at times, unreserved, speeches by Mohammed Jaber alSabbah you could feel Khalifa bin Salman wishing to let go.

At times I felt that dirtiest word to some members was Al-nizam ( alternatively: the system/the regime)


The privy purse is a problem. Ibrahim Sharif has done some work on that. Check his House of Lords presentation (past minute 21). Let me know what you think.

Lacking any level of transparency we are left to guessestimates. BTW how much is Umm Na'asan worth?

Yes SBG. It is interesting recording. My media-literate son tells me I should have taken a different pose :)